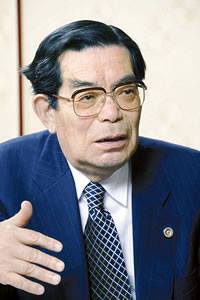 Masanori Ikeda, a lawyer who led work of JALANA as secretary general, vice-president, president and a board member, passed away on November 13, 2016, at the age of 88.

The former JALANA president Masanori Ikeda was born in the Korean Peninsula under Japanese rule in 1928, and he graduated from the Faculty of Law, Kyushu University in 1953. He became an attorney at law in 1966, and since then he devoted himself to activities for peace and nuclear disarmament. Throughout Hyakuri Base Trial between Japanese government and residents in Hyakuri, he defended local farmers who refused to yield their own lands to Japan Air Self-Defense Force (SDF), maintaining that the SDF was contrary to Article 9 of Japanese Constitution.

Masanori Ikeda organized a group of Japanese lawyers to attend the founding assembly of IALANA held in Hague in 1989. After returning to Japan, they founded Kanto Association of Lawyers Against Nuclear Arms, which became a nationwide organization, the Japan Association of Lawyers Against Nuclear Arms (JALANA) in 1994. In 1990s, Ikeda contributed to success of the World Court Project leading to the 1996 Advisory Opinion and Hague Appeal for Peace in 1999. He worked as JALANA president until 2010, and also dedicated himself to establish “No More Hibakusha Memorial Heritage Society” in 2011. In deep mourning, we bid farewell to our great friend.